10 Must Try Foods in New Orleans!

Where to go and what to eat

As we mentioned earlier, to say that New Orleans is a foodie town is an understatement.   Turning 300 this year, New Orleans has a rich history of French, Spanish, German, African and Indian cultures bringing a big influence on the food scene.  So you can imagine the interesting and delicious array of foods to choose from.

During our stay in September, we indulged in countless dishes including innovative appetizers, traditional treats, and touristy must haves.   It can seem overwhelming to try and experience all of what New Orleans has to offer,  but we've got you covered.  Let us help you navigate the way to our top 10 must have EATS in New Orleans.

Our Top 10 Eats of New Orleans

Sicilians were among the biggest groups of people coming to New Orleans.  La Muffuletta which means "little glove" was invented by Central Grocery for the workers.  They would pile mortadella, salami, provolone and olive salad on a loaf of bread and they were good to go.  No mayonnaise was used in this sandwich as it would spoil in the heat. 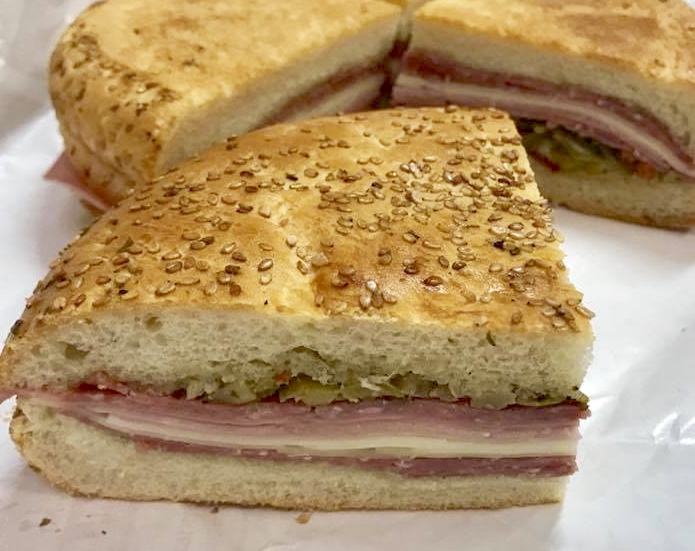 You absolutely want to get the original Muffuletta from Central Grocery.  We tried a couple, and this one was the best.  Something to be said about being the original.

The first thing everyone wants to try, Beignets.  Fried pillows of dough covered in powdered sugared goodness.  A must. 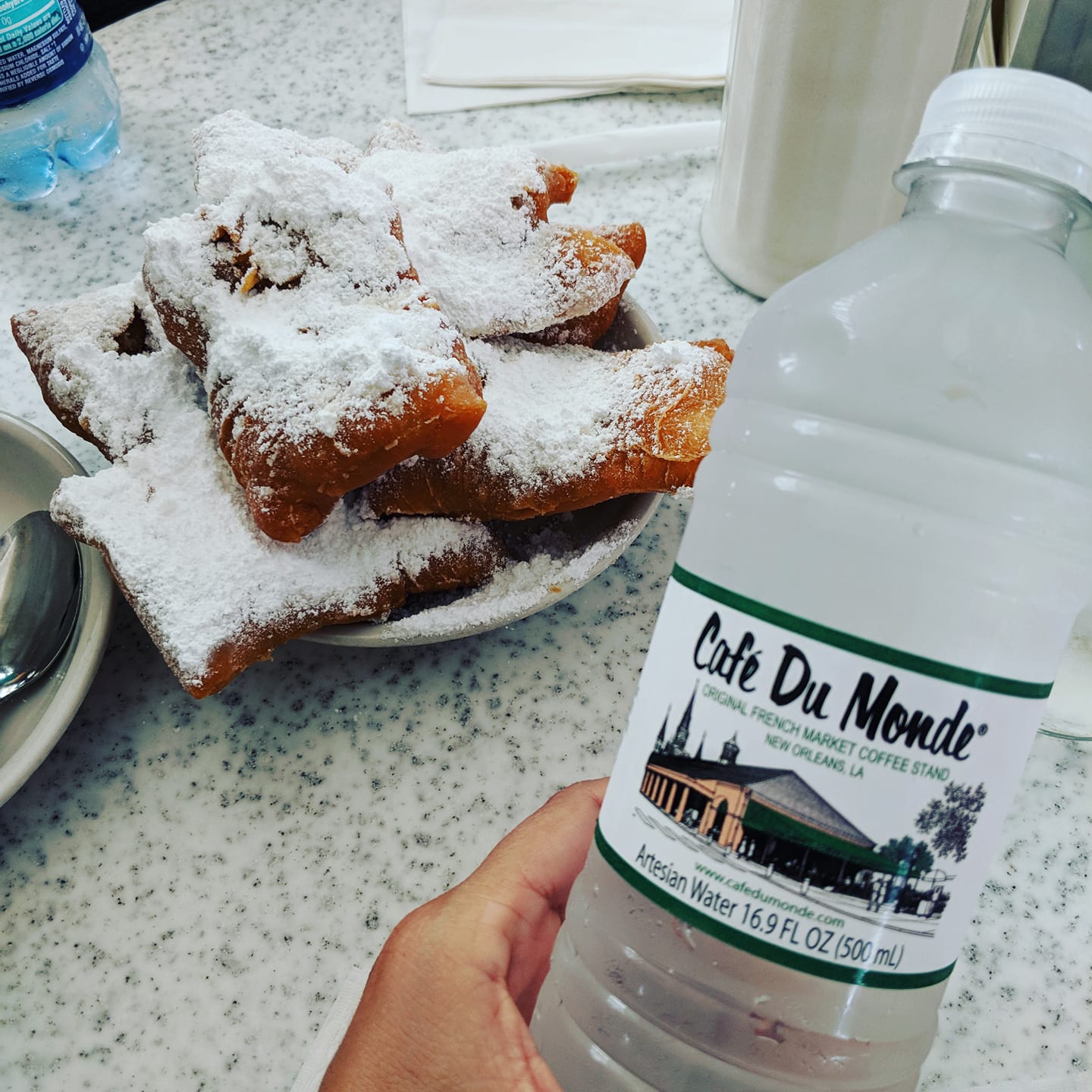 While there is a bit of debate on where to eat beignets, they are all delicious.

Cafe Du Monde is the place to go but if you are looking for a place a wee bit less touristy, visit Cafe Beignet.

Charbroiled oysters are a common (and scrumptious) thing in New Orleans.  The restaurant Drago's is home to the original Charbroiled Oyster invented back in 1993. (not shown)  If you are not a huge fan of oysters, try these and you will be a forever fan.

You can find Charbroiled Oysters everywhere but we ended up at our destination by accident.  Jet lagged and hungry, we walked Bourbon Street and ventured into The Royal House (shown) not knowing what we were going to eat.  We dined on their Charbroiled Oysters and we are not kidding when we tell you that it was one of our favorite dishes in New Orleans.  We asked for extra bread or we were going to lick the bottom of the dish because they were that fantastic. 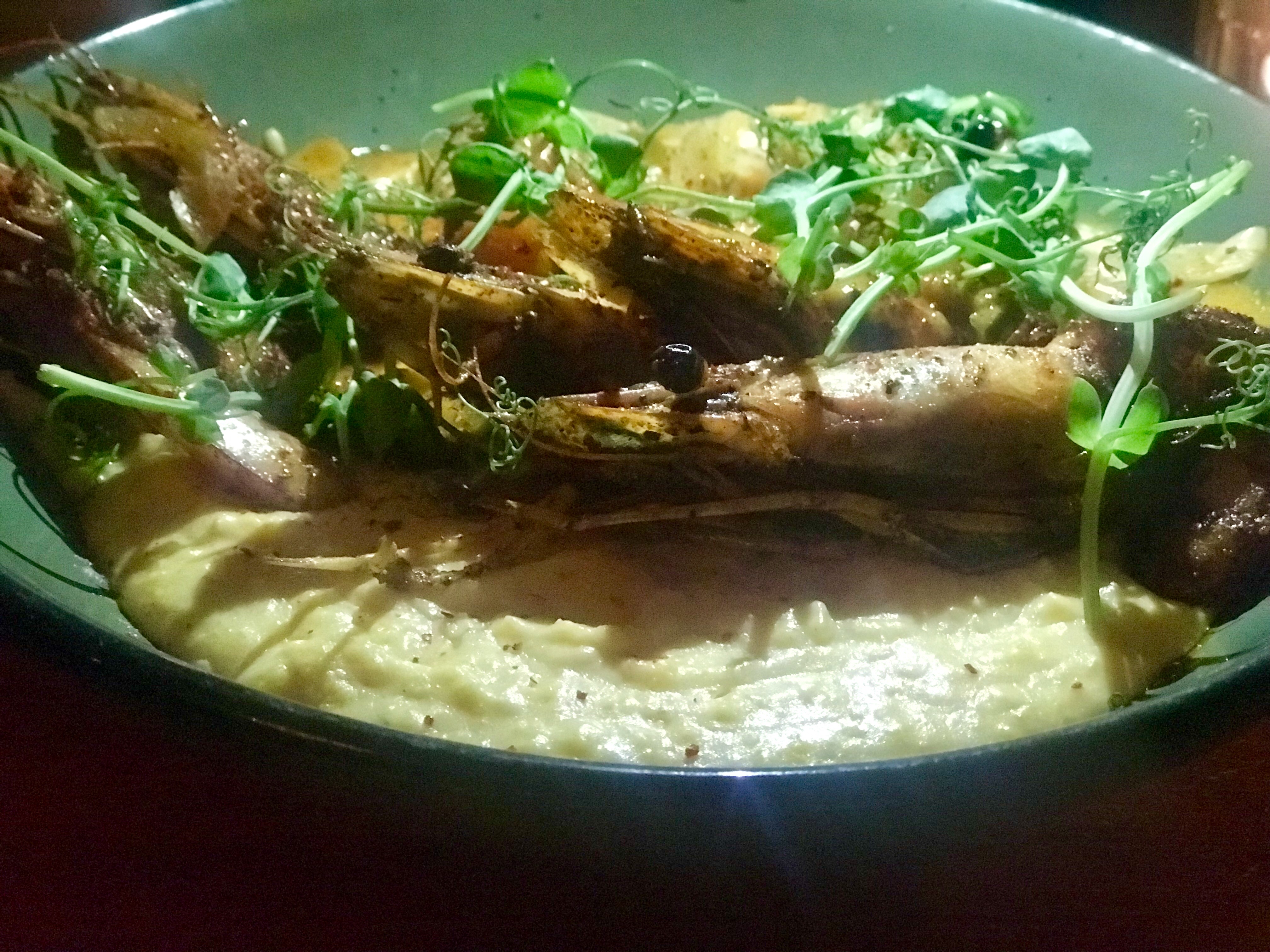 If you could have seen our faces when we spooned a bite of those velvety grits into our mouths.  The creamiest most decadent shrimp and grits we have ever had.  This is a meal you will never forget.

All cultural elements of New Orleans coming together. 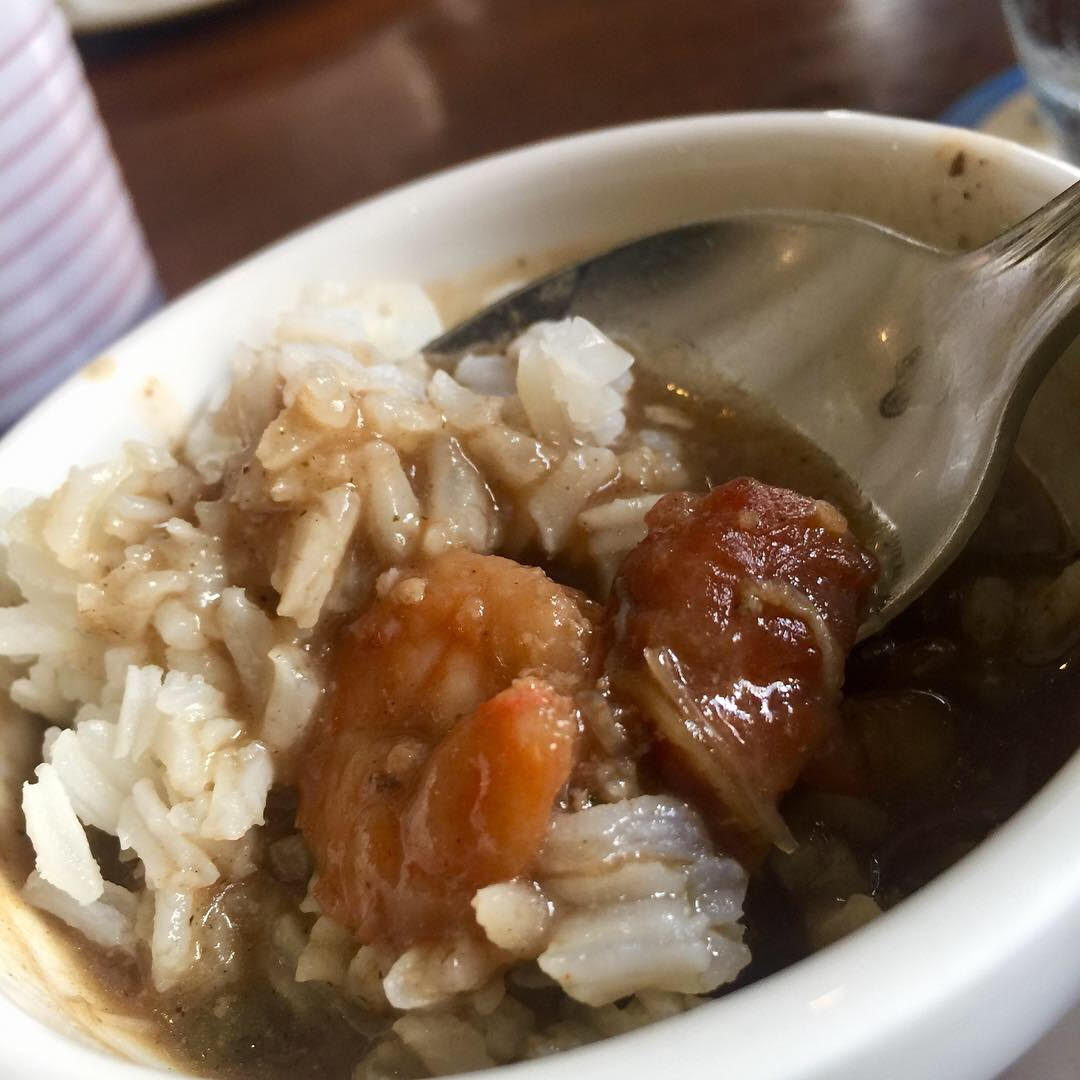 The chicken and andouille sausage gumbo at the Gumbo Shop (not shown in image) is regularly voted as the best in New Orleans by the annual Gambit Readers' Poll every year.  We also loved Dickie Brennan’s Seafood Gumbo! (shown)

Originated in 1910, the Po-Boy was invented and given free to workers on strike.  "Here comes another one of those Po' Boys!'  The original sandwich was made with fries bread and gravy.  Now, you can find all kinds of variations and having it dressed means you are adding pickles, tomatoes, mayo and lettuce.  The only way to have it. 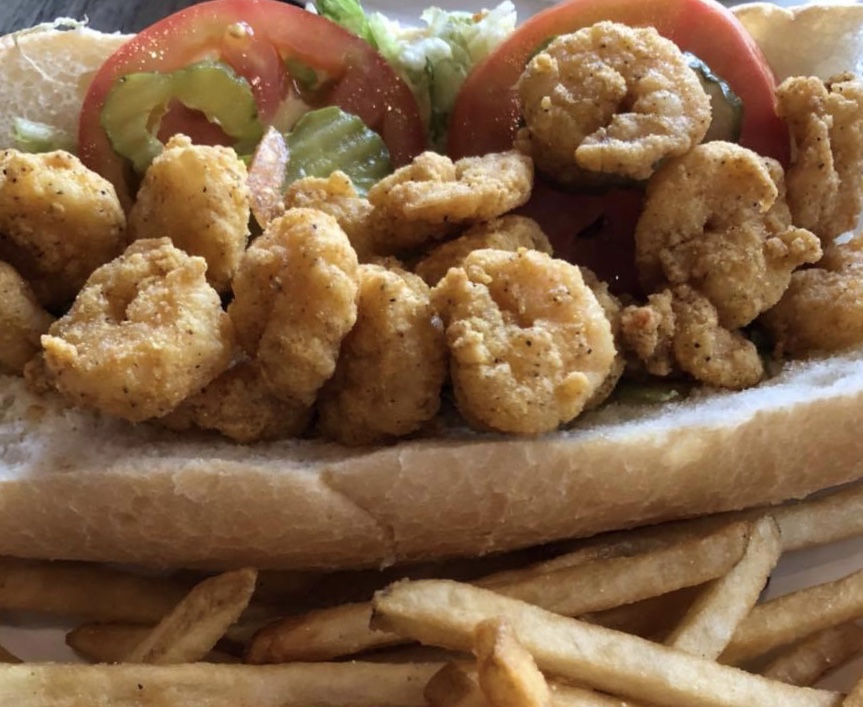 You can find a great Po-Boy in just about any place in New Orleans, but by popular demand, we chose Guys Po-Boys and Coterie Restaurant & Oyster Bar.

Pat O'Brien is reported to have invented the hurricane cocktail in the 1940s. The cocktail is a sweet alcoholic drink consisting of rum, passion fruit syrup and lime juice. 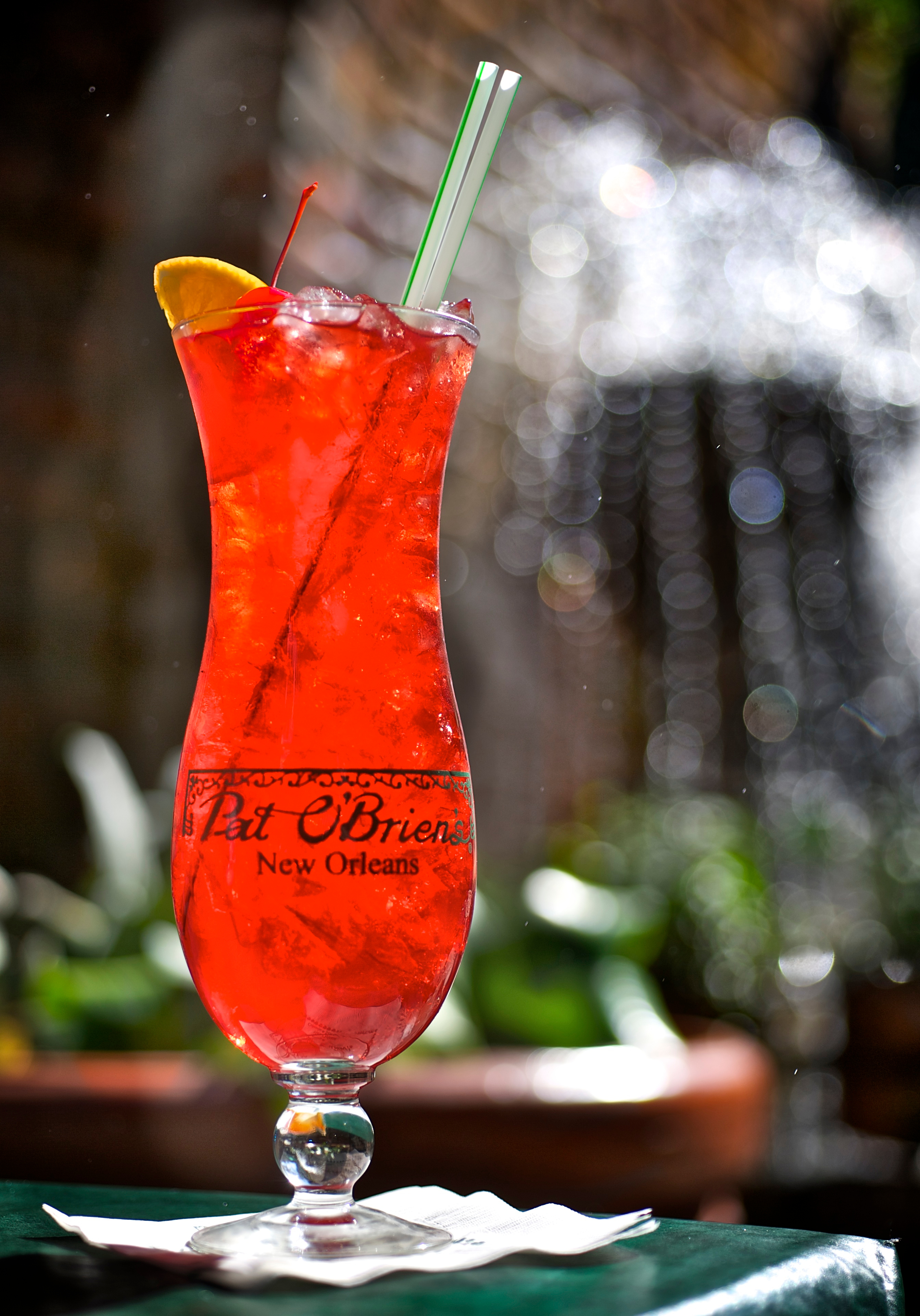 You can pretty much find this New Orleans drink anywhere, but we suggest going to the originator, Pat O'Briens.

The Fried Chicken Festival (FCF) presented by Raising Cane’s is a free outdoor festival that brings food, music, family and festivities together in celebration of the classic Southern dish. This free festival features more than 30 restaurants from New Orleans and around the United States. 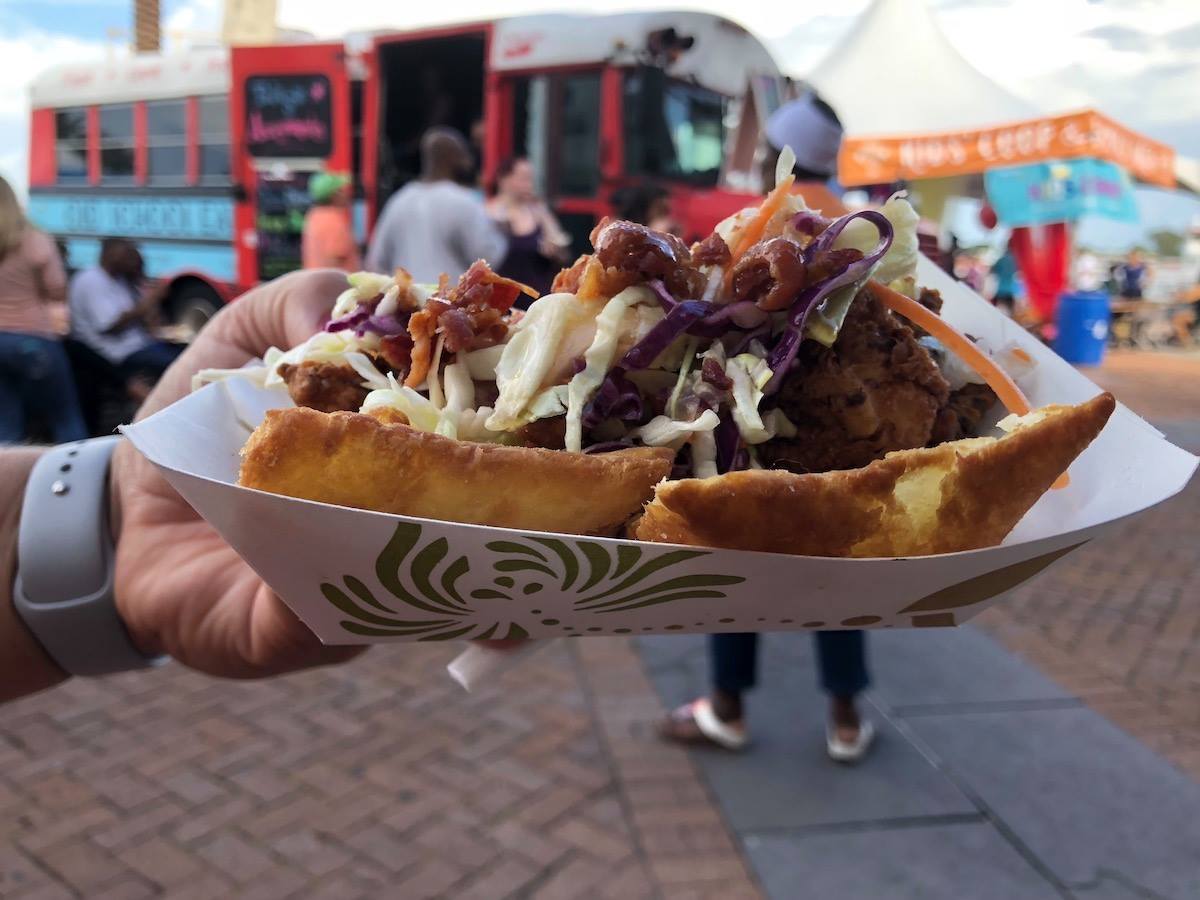 Invented nearly 400 years ago, the modern day praline is not very different then the ones made so long ago.  Pralinières were the women who used to sell pralines on the streets of the French Quarter in New Orleans during the mid-to-late 19th century 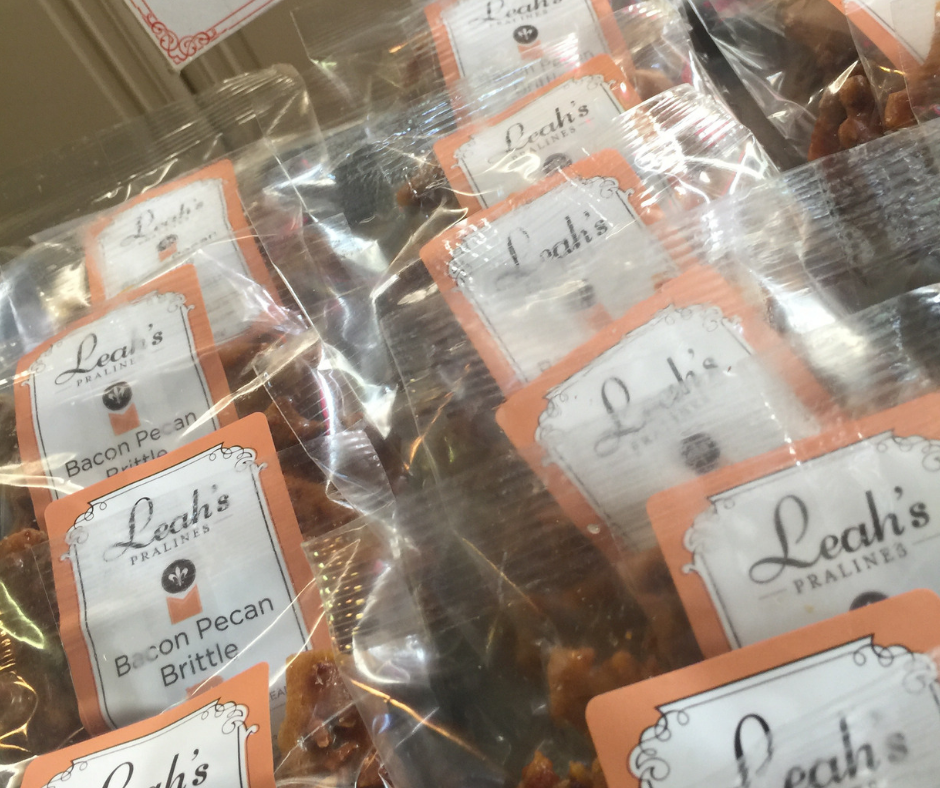 Leah's Pralines reigns as the oldest, continually operating family-owned praline shop in the competitive confines of the French Quarter.   We stopped at Leah's and swooned over the Palines and could not get enough of the Bacon Pecan Brittle.  You had us at BACON. 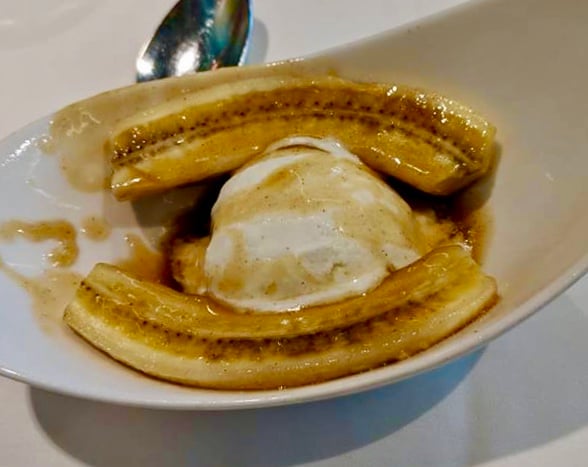 Only one place.  Brennan's.  Visit this New Orleans Original for the original Bananas Foster.

Here is our Top 10 must EATS list in a nutshell:

The Royal House for Charbroiled Oysters

Cavan for Shrimp and Grits

The Gumbo Shop for Gumbo

Guys Po-Boys for the Po-Boy

Pat O'Briens for the Hurricane

The Chicken Festival for Fried Chicken